Welcome to the section dedicated to patients

For nearly 40 years, MEDICO S.p.A., an efficient and flexible organisation with headquarters in Italy, working in the field of cardio-stimulation with the aim of ensuring that physicians and patients a high technological standard.

The next section was created to help you to understand the functioning of the heart and pacemaker.

The Heart: how it works

The heart is the engine of the circulation. It pushes the blood, oxygen and nutritive substances vehicle, to all the organism tissues.

It is constituted of a particular muscle, is divided in four cavity: two atriums and two ventriculums, which contract themeselves rhythmically driven by an electrical stimulus, produced by a special group of cells positioned in the right atrium wall, called “sinus node” or “natural pacemaker”.

The stimulus starts from here and propagate to whole atriums wall and then, through a well defined mulscle bundle (common bundle) and its ramifications (left and right branch), spread to the ventricular muscle leading a contraction.

The atriums first, and the ventriculums after, normally are contracted 60-80 times per minute, and more than 100.000 times per day.

The blood movement in the cardiac cavity and in the circulation, can be described as follows: the left ventriculum push the blood in the aorta and in the arterial system to the whole body; after distributing the oxygen and te nutritive substances to the tissues and collected the wastes, the blood goes into the veins and then to the heart, more specifically, in the right atrium from which is then pumped in the pulmonary artery and in the pulmunary circle, where is refilled by oxygen; the blood come back again to the heart through the pulmonary veins in the left atrium then in the left ventriculum to the general circulation.

The heart pumps 5-6 blood liters per minute, in rest conditions; under effort this quantity can reach 20 liters in a normal subject.

One of the main parameters which affect the blood pumped from the heart is the contractions number per minute.

When for the altered functionality of the sinus node or a lesion of the natural stimuls conduction ways (common bundle and branches), the ventriculums contractions are reducted and therefore the blood pumped is not enough anymore to satisfy the organism needs and thus some malaise may occur such as: vertigin, bad physical resistance, breath difficulty, “gonfiori alle estremità”, sudden uncosciousness….

At this point the patient needs an artificial stimulator or pacemaker, thanks to which is possible to increase the contraction rate so let the heart pumping the necessary blood quantity.

The pacemaker; what is it

The pacemaker is a small electronic device, feeded by battery , that produce electrical stimulus leading the heart contraction. Such stimulus are conducted to the cardiac muscle through thin wires with a rate equal to the normal heart rate.

There are many pacemaker types, with different features capable to adapt to the various conditions todays treated by the cardiac stimulation.

The most part of pacemaker are called “on demand” and starts pacing only when the natural heart rate falls down a certain level, while are inhibited when the activity goes back to the normal values.With such types of pacemakers and other technical cunning, is possible to get an efficinet and sure stimulation and also to save battery energy thus increasing the device life.The new litium battery and the new electronic circuit, allows a potential device life to 5-10 years and more.

Moreover, today is possible to externally adjust, without bothering the patient, the pacemaker programmation, changing for instance the rate or the pacing energy, through a particular device (programmator) which is superposed to the body part where the pacemaker has been implanted making a magnetic field and radio waves.

Through the programmator is possible to interrogate the pacemaker obtaining informations about his working state, the number of stimulation delivered, the battery status, ..etc.

Some pacemaker are capable of stimulating the heart with variable frequency, based upon the organism needs ( pacemaker with automatic adjustment of the rate based on breath, on the temperature, on the physical activity,.etc); some others, provided with sophisticated circuits, are capable of recognize cardiac arrhythmias, and are used to treat not only the blocks but also the accelerated rhythms (antitachycardia pacemaker).

How it is applied

The pacemaker application require an operation, in which the most important part is the connection between the stimulator and the heart.

This is made by inserting the electrocatheter through a vein to the right ventriculum with the “tecnica del cateterismo cardiaco” thus with a minor operation in local anaesthesia.After the electrode (or electrodes) has been applied, and after some efficiency stimulation checks, the wire is comnected to the pacemaker.

Through a little incision the pacemaker is inserted under the skin and definitely placed.

The patient will promptly feel the benefits, and the malaises will quickly disappear.

The little pain in the insertion site will last for some days, and a small swellin (not visible under the clothes) will take place.

How it is checked

The pacemaker, like all the electronical and mechanical devices with continuous activity, needs to be periodically checked. Its right functionality can be also seen by simply looking at the wrist.

Infact is well known how the wrist is produced by cardiac pump activity, as well as the neck and that the number of beats at the wrist for instance is generally correspondent with the number of heart contraction and therefore to the pulses delivered by the pacemaker.

A regular wrist, with rate equal or close to that indicated at the implant or at the last follow up is a confirmatin of the right functionali y of the pacemaker.

Naturally this is true for the stimulator with fixed rate and not for those driven by the “natural pacemaker” (sinus node) or by other parameters (breath, temperature, muscle activity), with such pacemaker the frequency can change a lot in the various situation.

During the follow up many other checks are operated ( ECG, magnet application and programmator..etc) oriented to verify not just the pacing efficiency but also the pacemaker status.

The wrist check has to be usual for the patient with pacemaker, who operate it by himself or with someone else help once a day, recording the data in a diary.

The follow up schedulation at the implant centre depends on the pacemaker type.

When it is substituted and how it is done

When, at the follow up, the battery results in the discharging phase (which can still last for several months) or that the pacemaker is not working properly, is necessary to proceed to its subtitution. The operation for the substitution is generally very easy and quick. An skin incision in corrispondence of the generator will be done to extract the implanted pacemaker, disconnect the catheter (or catheters) and connect the new pacemaker and definitely position it in the same place of the old generator. Usually the patient remain in the hospital for several hours, or one or two days maximum.

Once the pacemaker has been substituted, the patient must respect rules and use the precautions indicated at the first implant.

Living with the pacemaker

After the application and the substitution of the pacemaker and before leaving the hospital, the patient will receive a special card containing the personal data, address and phone number the operation date, informations about the pacemaker catheter (brand, type, site, number of pulses per per minute, their amplitude and duration), the address and phone number of the hospital where the pacemaker has been implanted and where he usually go for the periodical follow up. Furthermore the last follow up date and the new one scheduled. 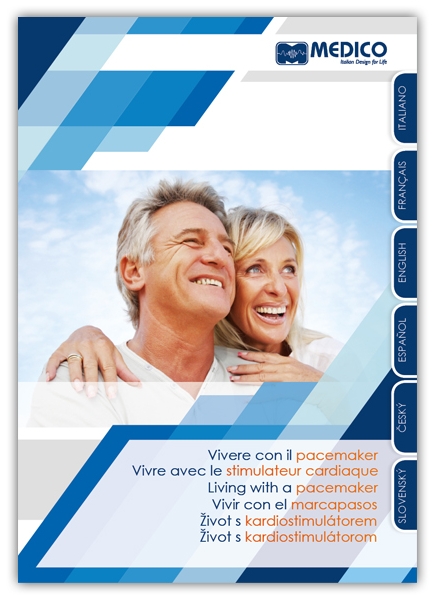 Living with a pacemaker

Instruction about the treatments and life style

– The suggested drugs needs to be taken regularly. In case of drugs that affects the heart and the circulation, they can improve the results obtained with the pacemaker. In case of other drugs the pacemaker presence usually is not controindicate.

– The diet of the patient with pacemaker do not need particular attention. Avoid big meals and do not abuse of coffe and alchool. In some particular case follow the alimentary regimen suggested by the doctors.

– Travel by car, by train, by plane are not usually controindicated. In the airport is important to avoid to pass through the magnetic checks which can disturb the pacemaker work. In this situation is important to tell the staff about the pacemaker, showing the personal card. Consult the hospital before long journey, and bringing the addresses of eventual exisitng centres. The drive license can be mantained by asking the centre for the proper certificaton.

– The work is allowed within light and sedentary tasks. During the job the patient has to take care of all the precautions, particularly avoiding the electromagnetic interference which can result in a bad pacemaker functionality.

– Sexual relations are not controindicated.

Has to be avoided

Every physical activity which results in weariness, breath difficulty or vertigin; jumps or sudden movement which involves the pacemaker site; the strokes and the pressure over the stimulator. The possibility that the normal functionality of the pacemaker is disturbed by electrical discharge or electromagnetic waves do not recommend to get close to electrical engine, internal- combustion engine, radar stations, short wave baking oven, and as said before to pass through the magnetic checks in the airports.

The patient with pacemaker has to advice his employer, the physician and the specialist where he goes for the first time. Particularly the dentist, the physiotherapist and the surgeon (the electrical lancet has to be used with care).

Is not nevertheless dangerous

Dalily wrist check. If in rest condition, is very irregular, or if the number of beats is reduced by more than 6-8 per minute respect to the starting values with a fixed pacemaker rate,the patient has to consult the family doctor and then the follow up centre. The same has to be done if the malaise that leaded to the pacemaker implantation reapperas: sudden unconsciousness, vertigin,..or other such as: long palpitation crisis, bothering muscle contraction in the pacemaker site or at the thoracic base. The wrist rate can increase, sometime by many beats, respect to the implantation indicated frequency, and varying in rest phase or after a small effort. This is normal for the pacemaker with variable frequency, and can happen also with the normal pacemaker “on demand” when the natural activity of the heart is restored, therefore the patient do not need to be alarmed.

If the patient is away from its own place

And far from his follow up centre, he can ask the hospitals which implant pacemakers, distributed in the whole country, and where he can receive the assistance needed.

Living with the pacemaker is not a reason to be worried.

The stimulator is not a misterious object and is made with cunnings providing the maximum reliability.Its use allows not just to eliminate some bad disturbance, but also to improve the life quality.

Many people all over the world had been able to restart an active life and realize projects they already abandoned.

The progress in medicine and technology is a warranty for the realization of reliable and long life stimulators. But as happen in all kinds of therapy the best results are obtained just with the full collaboration of the patient .

How to find us | Events | Job Opportunities | Contacts

Living with the pacemaker